Richard Howitt, Senior Advisor at Frank Bold, explains how the benefits to business of mandatory sustainability reporting outweigh the costs.

In this two-part article, we analyse what this means for the ‘business case’ for companies to pursue sustainability and to report against this. In Part One, we present the new evidence, showing not only that the additional costs of the new legislation are “negligible” for companies, but that it will actually lead to an average cost saving up to €41,700 per company each year in streamlining requests for sustainability information to the business from other sources.

The EU’s new draft CSRD seeks to extend the number of companies covered across Europe four-fold in comparison to existing rules and is instrumental in leveraging the opportunities for companies derived from the EU sustainable finance strategy and Green Deal.

However, it is the evidence accompanying publication of the draft law which may prove decisive in finally embedding a mindset across the business community that good sustainability reporting is good business too.

What is the new evidence?

The European Commission’s impact assessment on the CSRD and linked research from the Centre for European Policy Studies (CEPS) on the previous Non-Financial Reporting Directive (NFRD) are both categoric in showing that mandatory sustainability reporting is both affordable for business and actually leads to a reduction in cost in the medium and longer term.

The average recurring cost of €30,897 to the company from the legislation is shown to be “negligible” in relation to the overall costs of the business and is proportionate to the size of the company in any case.

The additional or incremental cost is calculated to be just 0.005% of turnover on average for the first year, and is calculated to further reduce in subsequent years, once systems are set in place. Moreover, the studies show that up to a half of this cost would have to be incurred in any case, described as the ‘business as usual’ calculation.

As independent assurance of sustainability reporting is a new aspect of the CSRD, it is interesting that three-quarters of companies which already seek assurance under the NFRD – widespread in France, Belgium, Italy and Spain – pay no additional cost to their existing auditors for doing so. For those that do pay, the average cost is just €5,000.

Other aspects of the new CSRD proposal are also seen to limit costs.

The proposal for companies to publish sustainability information in the management report rather than separately is seen to generate an average saving of €15,000 for the company, compared to publishing a separate sustainability report. 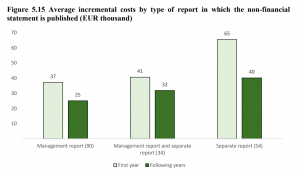 The EU’s ‘double materiality’ definition (impact on the company and on stakeholders) is already shown to be adopted by 40% of companies, enshrining the concept of sustainability impact in business risk management and paving the way for this understanding to be adopted in other jurisdictions.

For anyone still sceptical about the accuracy of these findings, there is the further proof that predictions made on the costs of the NFRD at the time when it was agreed in 2014 have been shown to be within and at the lower end of the European Commission’s impact assessment at the time.

These new findings are corroborated by earlier studies which show that predictions of extra cost in mandatory sustainability reporting have often been overstated. For example, the introduction of social and environmental accounting in to the Danish Financial Statements Act was found to have generated recurring cost to the business of just €871-4,383 in ex-post studies.

What will be even more eye-opening to cost-conscious CFOs in companies across Europe, is the bold claim that the CSRD will actually save cost over time.

This is attributed to bringing greater clarity to which sustainability information is required from the company and making it easier for the company to get relevant data from business partners and supply chain too. The CSRD proposal will also help in rationalising the number of additional requests for sustainability information from external actors, including investors, ESG ratings agencies and other stakeholders.

The benefits of sustainability reporting have been amplified with the rapid rise of ESG concerns by investors. Furthermore, the EU sustainability finance strategy aims to channel through a mix of legal requirements, incentives and benchmarks a staggering €850 billion to support sustainable activities. [See detailed timeline of related EU legislation]

Indeed, the explosion of demand for sustainability information from different actors is shown to be the true future cost to business, inevitable unless a more widely accepted set of standards is established, allowing the existing ‘fragmented’ landscape of reporting demands to ‘converge’.

This element of ‘reporting fatigue’ amongst businesses is matched by the significant shift in favour of ESG standardisation in the investor community and the fact that ESG data will be a prerequisite for accessing sustainable finance and public funds supporting sustainability transformation.

For the first time at the European level, the impact assessment puts a figure to this question, suggesting that the reduction in information requests will lead to an average saving to companies of €24,200-41,700 per year.

In addition, the cost for a company reporting according to a single framework rather than multiple frameworks (three or more), is shown to provide a cost saving of €45,000, nearly halving the cost of sustainability reporting itself, for companies previously reporting at this level of complexity.

What’s more, the mandatory element of the proposal, about which companies and business associations would have been cautious in previous years, is also shown to represent only about 40% of the cost – compared to the 60% which would be generated by voluntary approaches in any case.

Standards are shown to give companies greater clarity and certainty about which information to report, cutting the time and resources needed to understand how best to comply with EU legislation.

The public consultation conducted by the European Commission on the CSRD show that 80% of companies which prepare reports supported the establishment of common standards, with 71% of these also supporting the proposal for sustainability reports to be assured to such common standards.

A recent paper by the German Sustainable Finance Research Platform was clear in its call to include small and medium-sized enterprises (SMEs) in the CSRD, in order to avoid major data gaps in key sectors (such as agriculture where 70% of companies would still not be mandated to report). This would prevent uncertainty for smaller companies in their own reporting, provide better information to larger businesses and would secure a level playing field in opportunities to access finance, they argue.

The European Commission Communication on the CSRD describes the draft legislation as promoting ‘sustainable competitiveness’ for business and, by shaping global developments, this is said to translate in to a competitive advantage for European companies as a whole.

This confirms that the benefits of mandatory corporate sustainability reporting and associated standards are not simply described as benefiting people and planet, but also unapologetically put in economic terms in respect of value creation for the company itself.

The CEPS report lists this as achieving better access to capital; increased engagement of stakeholders and employees at all levels; improved brand image among customers; leading to higher approval from investors and extra-financial rating agencies; and inclusion in ESG stock exchange indices.

There is widespread recognition that corporate sustainability reporting is now leading to better risk management by integrating sustainability with financial risks. No fewer than two-thirds of companies surveyed supported that this was providing benefit to their business.

Benefits accrue across Europe and to all companies

Already, the new European evidence is confirmed by the separate research across Europe.

The introduction of sustainability accounting requirements in Denmark was seen as positive, even by businesses who were obliged by the legal requirement to report for the first time.

The fact that business has now generally accepted such findings is illustrated by a German Banking Association survey this year of 136 small and medium-sized businesses, both listed and non-listed.

Half of the medium-sized companies – the ‘Mittelstand’ – say that the European Union CSRD will benefit their company. In contrast to previous years when smaller businesses might have been expected to seek exemption from such legislation, a full three-quarters of the companies welcomed the fact that the EU wants to extend the scope of sustainability reporting requirements to include their companies as well.

“As far as sustainability is concerned, medium-sized businesses in Brussels are currently giving ‘advance praise’ for regulations on more transparency,” according to Janine von Wolfersdorff, head of the study.

Putting all this together, the European Commission’s Impact Assessment shows that there has been a detailed and credible trade-off between effectiveness and cost and that the proposal for the CSRD represents the very best option not simply Europe as a whole, but for its individual businesses.

In the past, such considerations would have been primarily aimed at policy makers, who will be more strongly convinced by this evidence that the new legislation will achieve its purpose.

The consequence is that there is a huge opportunity for the EU Parliament and Council to deliver this Autumn on the level of ambition reflected in this modern understanding of sustainability, in their final negotiations of the new reporting framework and landmark development of mandatory reporting standards in the EU.

What is equally clear, in addition, is that the new evidence has had a similarly persuasive impact directly on business opinion too. This is shown in the widespread company support for the new legislative proposal.

For individual businesses, the balance of the equation has changed.

This article was originally published as a part of Frank Bold’s series of 2021 monthly briefings focusing on sustainability reporting. It can also be accessed on the Alliance for Corporate Transparency website.