Gordon Tveito-Duncan, Head of ESG Technology at GaiaLens, explains why the ESG performance of the technology sector does not deliver on its publicity.

The technology market tends to get reasonably good press as regards greenhouse gas (GHG) emissions. We’ve already heard from the likes of Bosch, Dell, Google and Meta/Facebook about their ‘net zero by 2030’ targets and plans for getting there.

In addition, tech firms are creating solutions to enable alternative/greener energy production. They are setting targets for reduction and eventually elimination of the use of hydrocarbons, rare earths and non-recyclable materials in technology hardware manufacture.

Many are actively improving the recyclability of their products and even the re-useability of ageing technology hardware. Many tech start-ups are offering green solutions or services and have gained B Corp certification.

Furthermore, a good many investors now assume that when it comes to sector focus, to make the most difference we need to persuade the largest emitters to stop doing so. To this end, the Carbon Majors Database tracks the emissions of the top 100 oil, gas and coal mining groups. This database was first compiled by the Climate Accountability Institute back in 2013 and is kept up to date through collaboration with disclosure platform CDP today.

At GaiaLens we began running our Environmental Materiality Scores (EMS) for all major publicly listed businesses globally more than two years ago. This is our dynamic materiality calculation which is based on how material the environmental pillar is compared with the social and governance pillars for each industry and is solely data driven. Earlier this year, we decided to explore how a total of 70 different industries are doing in terms of their EMSs over time. We tracked their progress on reducing Scope 1, 2 and 3 GHG emissions from 2014 right through to 2020.

We were surprised that many technology sub-sectors seem to be going backwards in terms of Scope 1, 2 and 3 emissions, some to an alarming degree. The software market has gone backwards the most in terms of Scope 1 emissions over the period. Based on our ‘Scope 1 Intensity Scores’ across the 502 firms included, software providers registered a staggering 3,436% increase in GHG direct emissions ‘Scope 1 Intensity’.

The software market is also faring poorly for ‘Scope 2 emissions Intensity’ which captures GHG emissions from consumption of purchased electricity, heat or steam by the company, as categorised by the Greenhouse Gas Protocol, divided by the company’s revenue.

Scope 2 emissions intensity levels saw a 480% increase from a mean score of 1.15 in 2014 rising to 6.66 in 2020. In terms of Scope 3 emissions the software sector has seen an increase in mean scores over the same period of a massive 562%. Overall, the software industry’s EMS deteriorated by nearly 74% over the same eight-year period.

Yet oddly, the technology hardware, storage and peripherals sub-sector’s EMS has improved by 16% between 2014 and 2020. So, it is not all bad news for the technology sector.

The worse sub-sector from the point of view of deteriorating EMSs was banking technology, which saw its sector average EMS fall by 111%; followed by interactive media and services which saw a 103% EMS drop in the eight-year period to 2020. After that, followed the communications equipment sector (including telephone equipment, bridges and routers etc.) which recorded an 85% fall. A worrying 51 of the 70 sub-sectors which GaiaLens analysed had gone backwards between 2014 and 2020.

By drilling down into specific environmental material ‘features’ which we are collecting data on, it’s possible to identify the top 20 areas where certain types of companies are improving or doing worse on over time.

Scope 1 emissions records again appear to be the biggest areas of negative scores. For example, the snapshot below shows the worst-performing six features for software firms which are from a mixture of Scope 1, 2 and 3 emissions reports. The largest negative numbers – at the very top of the below chart – are linked to ‘direct’ Scope 1 GHG emissions reports. 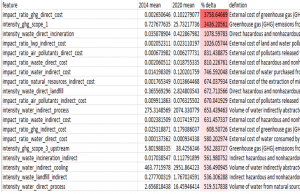 It is also possible for institutional investors to drill down to look at the ‘bottom 20’ listed software firms which have contributed most to their sub-sector’s EMS decline over a given time period. Below are bottom 20 in terms of environmental pillar scores in 2014 (to the left) and in 2020 (to the right). 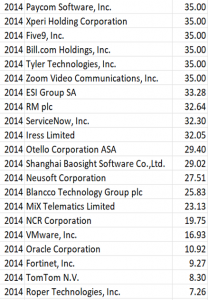 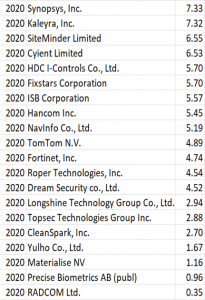 Investors who look at ESG metrics will see companies transitioning from performing in line with their peers or even below average to ‘better’ – tracking ‘ESG momentum’. If they care about ESG performance, they are going to increasingly invest in companies that are likely to improve over time. For example, some investors are trying to pick the energy companies that they think will transition to net zero the fastest. If they have a credible, detailed journey to net zero mapped out this will stand them in good stead from an investor’s point of view.

By contrast, poor ESG performers which are failing to chart their journeys to cut GHG emissions and make other ESG improvements are increasingly being seen as riskier bets longer term. Over time, the latter will find access to credit becoming more expensive. This will impact R&D investment levels, overall financial performance and eventually stock values.

Some of the deterioration shown in out EMSs must be linked to firms providing increasingly accurate environmental reports over the last five years. There is now clear evidence that many companies were initially making false or over-inflated claims for their products’ so-called ‘avoided emissions’ claims, which did not stand up to closer scrutiny and have since been adjusted downwards.

Many of the more common environmental reporting errors which many companies made since the first edition of the GHG Protocol Corporate Accounting and Reporting Standard (GHG Corporate Protocol) was published way back in September 2001, have now been spotted and rectified.

The GHG Corporate Protocol now provides requirements and guidance for companies and other organisations preparing a corporate-level GHG emissions inventory. It covers the accounting and reporting of seven GHGs covered by the Kyoto Protocol: carbon dioxide (CO2), methane (CH4), nitrous oxide (N2O), hydrofluorocarbons (HFCs), perfluorocarbons (PCFs), sulphur hexafluoride (SF6) and nitrogen trifluoride (NF3). It was updated in 2015 with the Scope 2 guidance, which allows companies to credibly measure and report emissions from purchased or acquired electricity, steam, heat and cooling.

Although the ‘Technical Guide for calculating Scope 3 emissions’ was published by the Greenhouse Gas Protocol way back in 2013, Scope 3 reporting is still not mandatory, although that milestone is not far away.

For example, under the US Securities and Exchange Commission’s March 2022 climate-related rule proposal, many public companies will be required to disclose their Scope 3 emissions on a mandatory basis for the first time during fiscal year 2024.

The chief criticisms of the Scope 3 requirements include difficulties with data collection and measurement, calculation methodologies, timing of compliance deadlines, liability concerns and materiality standards. Companies are now preparing to deal with these challenges and are closely following the progress of the proposal.

Yet ultimately, Scope 3 may account for as much as 92% of many companies total GHG emissions according to official estimates. Scope 3 emissions are generated by activities from assets not owned or controlled by the reporting organisation, but that the organisation indirectly impacts in its value chain. 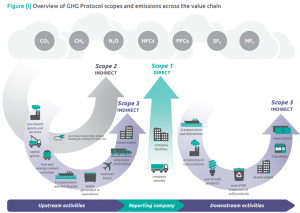 Scope 3 emissions include all sources not within a firm’s Scope 1 and 2 boundaries. Some of the deterioration of tech sector EMSs is undoubtedly associated with firms only just starting to report on assessed indirect ‘upstream’ and ‘downstream’ GHG emissions from their supply chains, including from component providers, distributors, channel partners, leased assets, as well as from hard-to-gather data like emissions usage by employees commuting to their place of work and end of life treatment of sold products (i.e., can their products be disposed of without adding additional GHG emissions?) in the last couple of years.

Many have not yet started Scope 3 reporting, so you could argue EMSs have still got further to go down before they begin on the long road to year-on-year improvement.

It is clear that environmental reporting is already a great deal more accurate, accessible, calculable and peer group-comparable than both the S and the G for ESG investing purposes. Use of sophisticated AI-based ESG scoring offerings can make sense of the Scope 1, 2 and 3 reporting outputs of public companies across the globe; and then combine this official output with increasingly available third-party performance data from climate change activist groups and NGOs – making it possible to monitor E pillar progress over time and helping assess what good looks like in an industry in which you are considering investing.

This means investors using the more actively managed strategies can dedicate themselves to researching and backing the ESG improvers in a given sector, while weeding out some of those ESG deteriorators we spotted in this piece of research.