The case for pessimism on climate change is pretty easy to make. A relative lack of progress at COP27, the political backlash against climate action in the United States, the boost to coal as Europe strives to keep the lights on in the wake of the Russian invasion of Ukraine, and the seemingly inexorable rise in global greenhouse gas emissions and atmospheric concentrations of carbon dioxide are not exactly reasons to be cheerful.

However, this cascade of bad news risks obscuring the very substantial changes we are seeing in relation to climate finance and climate policy. There are, in fact, three reasons why we could be more optimistic.

Firstly, international policymakers clearly recognise that financial support is needed to enable less developed countries to both reduce their own greenhouse gas emissions and transition to a low carbon economy, as well as to adapt to the unavoidable impacts of physical climate change. The COP27 decision to establish a ‘Loss and Damage’ fund to support action in countries most affected by climate change marks a step change, both by explicitly identifying the need for such a fund and through acknowledging the responsibility of developed countries to help less developed nations respond to climate change. Of course, many practical decisions such as what could trigger a pay-out, and the size and source of contributions have yet to be made. We also need to recognise that developed countries have yet to follow through on previous commitments to provide US$100 billion a year to help developing countries.

A second reason for optimism can be found in the national and regional policymakers who are making at-scale fiscal commitments to transform their energy systems. For example, over one third of the European Union’s 2021 budget – totalling €2.018 trillion in the largest stimulus package ever financed in Europe – is directed towards investments that will build a greener, more resilient Europe through supporting projects that save energy, diversify energy supplies, and accelerate the renewable energy transition. These and other funds form a key component of the European Green Deal in the EU’s strategy to become net zero by 2050, and of the Fit for 55 package focused on decreasing European Union emissions by 55% by 2030. 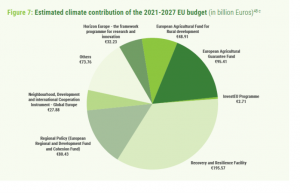 The US Inflation Reduction Act has similar features and will function at a similar scale. For example, it will expand access to clean energy by making clean energy tax credits more accessible, it will invest US$60 billion in manufacturing solar panels, batteries, and other clean energy technologies in the US, it will provide $9 billion in home energy rebate programmes, it will provide US$3 billion for the US Postal Service to electrify its fleet of more than 217,000 vehicles, and it will provide more than US$20 billion to help farmers and ranchers shift to sustainable practices like crop rotation and cover crops.

Of course, both programmes have been criticised. For the EU, the level of funding – a massive €86 billion per year over seven years – is still significantly less than the €1 trillion needed per year for the green transition. In the case of the Inflation Reduction Act, certain measures (e.g. requiring the federal government to open up parts of the Gulf of Mexico and Alaska’s Cook Inlet for oil and gas development) may run counter to climate change goals.

But the messages are clear. For policymakers in all jurisdictions, not just the EU and US, it is feasible to provide at-scale support for renewable energy and the low carbon transition, in a way that is both fiscally disciplined and that supports energy security goals. For investors, the low carbon transition is an at scale investment opportunity, and that fossil fuel-related investments are likely to be increasingly unattractive.

Learning from past mistakes

For the third reason, we could turn to the debate around climate finance and climate policy which is increasingly focused on how to address the inevitable challenges. For example, just transition (and the need to provide workers with skills, training and employment opportunities) is central to the EU’s proposals and to the policy discussion around climate change. It seems that policymakers are learning from the mistakes and missteps of the past and are now creating transparent, financially attractive and actionable green policies. As just one example, the EU has prioritised the rapid deployment of funds and of project delivery, helping to avoid pitfalls traditionally associated with large public stimulus funds.

In conclusion, we are finally seeing the sort of at scale, transformative, muscular and coherent policy initiatives that give us optimism that governments are willing to take action and deploy the public balance sheet in support of strong climate action. We should be realistic – there are funding gaps, there are political headwinds, the urgency of the climate challenge is not being reflected in political action. But we are starting to see action at the scale we need.

Should we be optimistic? To an extent. But we should also be cautious, we should be sceptical and we should press for more.