Historically, the integration of ESG factors has focused on equities and corporate bonds. Today, the ESG approach extends to all asset classes in a portfolio. Sovereign issuers, whether ‘emerging’ or ‘developed’, are no exception, with the development in recent years of an ESG sovereign rating based on precise and available data (for example on climate, human rights, employment or natural resource management issues). In order to better identify and manage credit risks linked to governments, many investors are integrating this assessment in addition to a traditional analysis based on macroeconomic and financial variables.

The ESG rating applied to company securities, stocks or bonds is a familiar term to responsible investors today. For several decades, rating agencies specialising in extra-financial evaluation have been generating ratings like these using their own approaches and methodologies. The primary objective of such ratings consists of summarising the company’s overall ability to face the key challenges of sustainability as it relates to three areas: the environment, society and governance.

Despite ongoing debates on the quality of ESG data and significant discrepancies between different ratings for a single company, the idea of incorporating ESG criteria when evaluating a company has become entrenched. This extra-financial rating has gradually been extended to other important asset classes, including bonds issued by sovereign entities.

The pandemic, together with the effects of climate change, had an explosive effect on sovereign debt, which reached US$65.4 trillion in 2021, according to the Janus Henderson Sovereign Debt Index. Beyond a shared desire to prevent ESG risk, the comparison between analyses of sustainability in companies and sovereign entities is quick to end, essentially as a result of their vastly different natures.

Traditionally, credit risk analysis of sovereign issuers considers macroeconomic and financial variables, such as the state of a country’s finances, the structure of its GDP, its rate of growth, etc. This classic analysis also contains aspects that are indirectly related to the pillar G, for governance, when we consider the rule of law, political stability and the smooth operation of institutions, all of which are significant stakes for the investor.

Extensive integration of the ESG criteria will broaden the scope of this analysis and flesh it out by focusing on new risks – those that are extra-financial, in this case. These are the existing, latent or potential environmental, social and governance-related risks to which sovereign issuers are structurally exposed, but also risks relating to the poor political and economic management of states.

Such risks have a certain effect on states’ ability to repay their debts, and therefore on their financial rating. Examples, both direct and indirect, of this ‘link’ between solvency and ESG performance are manifold. 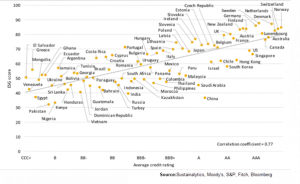 The major repercussions of governance are well recognised. If we consider recent news, Mario Draghi’s resignation from his position as Italian prime minister last July – the grand finale in a series of serious governmental hurdles – makes it even more uncertain whether Italy will be able to address its worrying debt issue (150% of the GDP in 2022) in a relaxed manner. Furthermore, Moody’s downgraded the country’s rating from ‘stable’ to ‘negative’ in August.

On a social level in Switzerland, there is an intuitive link between its famous and historical harmonious industrial relations (so-called ‘Paix du Travail’) and the satisfactory performance of the economy in terms of productivity and the Confederation’s ability as a borrower to keep its creditors reassured.

When it comes to the environment, the correlation is less obvious, but we know that Brazil, 20% of whose GDP is derived from the export of natural resources, is facing the strategic challenge of optimally managing the Amazon rainforest. It is even not worth mentioning the debt-related consequence of state spending to adapt to the growing and increasingly harmful effects of climate change.

As with companies, ESG data is central to measuring the ESG performance of sovereign bodies in terms of one material challenge or another – be it human rights, gender equality, water management or the protection of biodiversity – and eventually assigning an aggregated ESG rating.

International organisations and NGOs, such as the World Bank (see chart), the OECD, Transparency International and Freedom House now publish a multitude of detailed, relevant and publicly accessible information. These serve as a basis for ESG ratings from specialised rating agencies, such as ISS, Beyond Ratings, Sustainalytics and MSCI, as well as for research conducted by investors themselves.

The critique of this method lies not in the quality of the data, but in the methodologies used by rating agencies to attain an overall rating. Among other biases on which the critique is based, we find the concept of income bias: when compared with emerging sovereign entities, so-called ‘developed’ states generally receive higher ESG ratings, particularly because they have greater resources at their disposal to develop ambitious policies.

This endangers the ability of a state such as Costa Rica, for example (although it is still an environmental leader), to raise funds for its development. Another recent critique, which is also applied to grading companies, focuses on the weighting of the E, S and G aspects by specialist agencies. They will use different weights based on their own methodologies, leading to smaller or larger inconsistencies between ratings, which may result in confusion for investors, who are used to seeing a consensus from credit agencies.

In view of this analysis, it’s the responsibility of the investor to devote the necessary resources to carefully choosing the methodology that best corresponds to their ESG values and beliefs or, ideally, to devise their own ESG ratings for sovereign entities. All of these questions notwithstanding, it is clear that the added value of a sovereign ESG assessment, in addition to credit risk analysis, is something we can now all agree upon.